Once upon today, there is a collection of short fables which explore this wondrous world we share in a whole new way. Click on the title of the Tale of your choice to savor each and all!

1. THE FROG AND THE PRINCESS

In a land of far away, in a time not yet today, there lived a horrible giant.

3. THE GRASSHOPPER AND THE ANT

On a bright, clear summer’s day not so long ago, a fine young grasshopper was hop-hop-hopping his way through the tender sprouts of new flowers down in the meadow of a quiet little dell. The sun was shining in the heavens above, where ever-dangerous birds circled lazily.

All was right with the world.

The grasshopper could hear his cricket cousins chirping merrily in the tall grass. So he skipped along quickly, eager to…

There once was a rogue thief who was very good at his trade. His nimble fingers made him particularly suited for picking a well-lined pocket, and he did so with great skill whenever the opportunity presented itself. Because he had a sharp eye, he was also adept at recognizing…

On a day like today, but a time far away,

When the wind in your hair made you quiver…

There once was a man, o dearest beloved, who lived in the depths of the deepest, driest desert in the whole, wide world. Day after day, my smallest darling who should attend what I say now, the desert got deeper and the desert got drier.

But the man was a most clever and brave man, a strong and powerful man, a most ambitious man. He was like no man you ever saw, my most enchanted listener, and like no man you’ll ever see. He decided to become ruler of all he could survey and all that was within his reach.

So this man who lived in the depths of the deepest, driest desert in the whole, wide world rose up and…

7. THE WOODSMAN AND THE PRINCESS

A long time ago, in a land of wealth and plenty, there lived a simple woodsman. As woodsmen went, the simple woodsman was a fine man. He was skilled at his trade, a trusted servant of the good and powerful King. He was, however, an unknown employee to the royal sovereign, having come to his position…

It was a dark time for the world of light. The Heathen Infidel controlled the Holy Land. The Mad Caliph had absolutely forbidden True Believers their God-given right of pilgrimage.

9. THE LAMB AND THE LION

On a clear summer’s day, when the sun lovingly caressed the good earth with a gentle touch, a fine young lamb born of the spring looked about the peaceful meadow he shared with the rest of his flock.

“I’m bored,” he said to no one in particular. “I’m really bored. There has to be more to the world than this…

10. A MAN WALKED INTO A TAVERN

A man walked into a tavern.

He came in from a terrible storm.

Drawn by the light of the fire,

And the chance to eat and get warm.

He was greeted by music and laughter.

The serving wench gave him a smile.

“I’ll bet you’d like a drink and some supper,

…The brave little tax-man walked all day long and half a day more until he returned to the castle of the good king. A great hush fell over the great hall of the royal court as he entered. The hush remained as he made his way to the foot of the royal throne.

“Is he dead?” the good king asked in a small voice, not daring to believe the meek little man before him could possibly succeed where stronger men had failed so miserably before him….

There once was a time when real men were judged by higher standards than their fellow citizens. It was in this time one man stood above the rest…

13. THE HOUSE MOUSE AND THE LABORATORY RAT

In a corner of a castle in a land of far away, in a remote tower by the moat, there was a hole in the bottom of a wall. It was not a very large hole at all, hardly noticeable from a distance of more than ten or twenty paces at best. But it was a fine little hole, none-the-less. It was just big enough to provide a nice warm, cozy home, safe from the gales of winter and the rains of spring, to a gentle grey rat.

In fact, the only complaint the gentle grey rat had with his fine little hole in the bottom of a wall in a remote tower in a corner of a castle near the moat in a land of far away was this…

On a fine spring morning long ago, in a simple but comfortable cottage down a well-worn lane off the main street which ran through town, there was born…

Twinkle, hapless little star
A-spinning out in space.
The sky above, the sand below
This trackless human race…

16. HOW THE SKUNK GOT HIS STRIPES

In the very beginning, o dearest beloved, there was nothing but the darkest of darkness. If you had been there in person…

…”Have you succeeded in your task?” the good and powerful king asked in his most-authoritative voice for the benefit of all assembled in the great hall.

“Indeed I have, Sire,” the most exalted and educated wizard answered with a smile, obviously most impressed with himself.

“I’ll be the judge of that,” the good and powerful king said. “Show me what you’ve got.”

“Yes, Your Majesty,” the most exalted and educated wizard said, offering a small black box no bigger than…

18. ROCKY AND THE ROADIE

…In the last rays of each dying day, after school and chores but before dinner and homework, young Rocky diligently practiced his precious mandolin following the careful instructions of the excellent tutor his parents had hired for him at a very dear cost.

At first, the friends and family and neighbors from all around took to avoiding the well-worn lane off the main street which ran through town during the late hours of the afternoon. The shrill notes emanating from the simple but comfortable cottage produced a ghastly assault on all and any ears which happened to be passing by.

But Rocky kept at it. Finally, as if by some miracle, his fingers at last found their proper place. The noise turned to music, filling the town with art and beauty. Soon enough…

Early one morning, a little grey rabbit was sleeping in late in the peaceful safety of his hole in the floor of the vast, verdant wood. Suddenly, a roar like thunder shook his home. It repeated over and over with no particular rhythm to speak of. It drew closer and closer all the time.

This was very strange because there wasn’t a cloud overhead. In fact, the weather service had forecast clear skies for the balance of the week!

Not fully awake but very curious all the same, the little grey rabbit cautiously peeked out of…

20. THE LEGEND OF THE BELTLESS HORSEMAN

In the town where I was born, in the white plains near the dale of the heart, there once lived a man. There was nothing out of the ordinary about him, for he was just a man. He did manly things in manly ways because he was a manly man. But for that, there was nothing exceptional to speak of.

The man’s name was Jacob, although that is of little importance because he was, after all, just a man with nothing out of the ordinary about him. He lived in an ordinary house down an ordinary road near the edge of the sprawling woods which grew wild and free around the white plains in a time before the land disappeared beneath the streets of the great cities.

Jacob was, by trade, a barrister. People trusted him about as far as could be expected. His counsel was sought after far more frequently than his companionship, because…

In a castle by the bay in a land so far away, sheltered from the stormy sea, lived the Princess Rosalie.

As the only daughter of a good and powerful king, the Princess Rosalie was considered the realm’s Bachelorette Number One. Suitors lined up from sunrise until the end of business hours to plead for her hand.

Naturally, all this attention went to her head. In a very short time, she became…

A long time ago, on an island in the middle of a coastal bay where sunshine struck the water everyday at high noon and split into a thousand sparkling pieces, a pair of boys was born to a highly-respected advocate and his good wife.

Overjoyed by the good fortune of having produced twin sons on their very first try, the couple eagerly presented the duo to their family, friends and neighbors with justifiable pride.

“They’re adorable,” the smiling family, friends and neighbors told the highly-respected advocate and his good wife. It was true. The baby boys were really quite handsome. “Have you given any thought to what they will be when they grow up?”

The highly-respected advocate would stick his thumbs through the belt loops of his pants and puff out his chest. “I have some thoughts on the matter…

Once upon a time, in a far away land by the Western Sea, there lived a young and beautiful princess named Kathryn. She lived in the castle of her father, the good and powerful king. By day, she enjoyed a spectacular vista of sunlit water and crashing waves from her chamber windows. By night, the darkening sky became a vast ocean of sparkling stars for her viewing pleasure.

Each evening, Princess Kathryn would stand on the balcony outside her chambers in the castle of her father, the good and powerful king, and watch quietly as the fire of the sun disappeared into the mighty waves of the Western Sea.

When the first star twinkled into view, she’d wish on it. This is what she’d wish every evening without fail…

In the time before there was time, the Great Spirits looked out from their lodge in the heavens. Deep in the darkness, they beheld a wonderful place. In that place, they made the land. But it was very dark. It was hard for the Great Spirits to see the land which they had made. So, they placed a ball of fire in the sky above it.

Once they could see what they had done, the Great Spirits were pleased. The land was rich and green. But the ball of fire soon turned the land to brown. This is not what the Great Spirits wanted, so they went back into their lodge in the heavens and sat down together to discuss the problem.

They lit a pipe and passed it among themselves as they considered what had to be done. “It is obvious,” the Great Father said to his clan. “We need to… 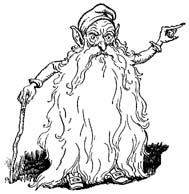 Once you’ve enjoyed these Truly Grim Tales, check out the full fantasy novel:

Once upon a time, a foolish fairy king was banished by his clan. His only hope for redemption was to earn a mortal’s trust.

The charming, humorous fantasy novel by P.K. Silverson is now available on demand. For more information and a full excerpt, visit the Author’s web site: